The big push from Microsoft over the last few years has been towards the cloud, and in the SharePoint area this means Microsoft wants you on Office 365 instead of on-premises SharePoint servers.

None of this should shock you, Microsoft has been yelling it loud and clear for some time now, and the message came through loud and clear at the SharePoint Conference in Las Vegas this year (my key takeaways from the SPC14). It has now been announced that was the last SharePoint conference and starting in 2015 a conference combining SharePoint, Lync, Exchange, Project, Office365 will run instead. 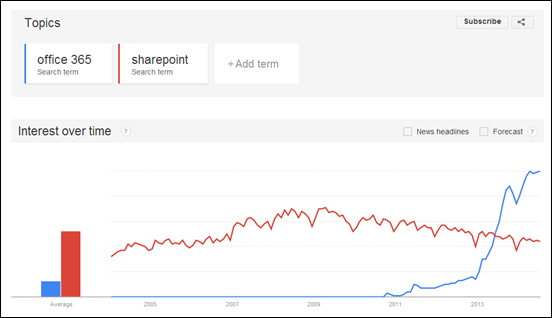 Microsoft’s Office 365 offering is compelling now they are starting to realize the benefits from combining multiple services into a single integrated offering. I don’t necessarily think Microsoft is trying to kill SharePoint off, it’s just drifting towards the background a bit in the noise of Office 365. When you look at Office 365, there are quite a few products that were thrown into the mix… SharePoint, Exchange, Yammer, Office Online, OneDrive, FAST. Trying to combine and integrate these products and leverage their combined power, Microsoft is heading towards talking about the tangible objects and features rather than the technology.. what do I mean by that? We start hearing terms like Conversations which may be a mixed thread of Email/Lync/Yammer all shown together, we start to talk of Documents whether they be stored in SharePoint and viewed with Office Online Apps, Office Desktop apps or accessed via OneDrive. It seems the technologies themselves are losing the focus and the rather the functionality they provide is coming to the fore (and I think this is where the rub comes for those hanging on to SharePoint on premises), this really awesome functionality is not provided by one product on it’s own, but rather when they are integrated together and the only way to get the highest level of integration and deliver this value is in Microsoft’s Office 365 cloud. So is SharePoint going away? I think it’s just becoming part of something bigger, and over time the functionality might just be called Sites or Workspaces or Places or Groups in Office 365 but it will essentially be the SharePoint of today powering the functionality delivered in the Office 365 of tomorrow. 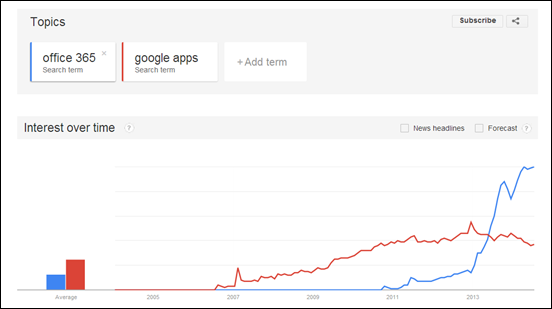 Office 365 (blue) vs Google Docs (red) – Office 365 is competing with Google for taking business apps to the cloud and looking at Office 365 vs Google Apps or Google Docs these stats show a pretty fierce battle underway.

One thought on “Is the SharePoint brand going away?”

This site uses Akismet to reduce spam. Learn how your comment data is processed.